Or the Churches of Edinburgh, depending on how you look at these things.

With such a long and rich history, Edinburgh has many sights and sounds to engage with and this includes a large number of churches, displaying real feats of architectural design as well as graveyards which are the final resting place of many famous Scots. Below is a closer look at five of Edinburgh’s most renowned churches.

High Kirk of St Giles
First founded in 1130, the High Kirk of St Giles has been modernised and redeveloped throughout the centuries but still has an exceptionally attractive and inviting appearance. The biggest alterations were carried out in the 14th century after it was burned down by invading English forces.
The grounds of the High Kirk of St Giles are home to the burial place of the famous Scottish Reformist John Knox. His grave is actually in the car park and no monument is placed for him as he is famous for the utterance: “Scotland is my monument” before he passed.

Magdalen Chapel
The Magdalen Chapel was finished in 1541 and its spire was added in 1620. It is famous because it has the only stained glass window in the whole of Scotland which survived the destructive Reformation in the 16th century.  The chapel is now part of Heriot-Watt University and is used as a worship space for people from all backgrounds. It’s one of the city’s hidden gems as it’s tucked away tightly under the cover of the George IV Bridge.

Canongate Kirk
At the lower end of the Royal Mile the Canongate Kirk was built by order of William of Orange and was originally completed in 1691. It is one of the country’s royal kirks and is the local place of worship for the Royal Family when they’re in residence at the Palace of Holyroodhouse. The wedding of Zara Phillips took place at Canongate Kirk in 2011 and the graveyard is home to famous Scottish economist Adam Smith.

Greyfriar’s Kirk
Probably the most famous church in Edinburgh, Greyfriar’s Kirk dates to the 1620s and is known for its famous kirkyard, including the grave of the legendary Greyfriar’s Bobby, a terrier who kept a 14 year vigil on his master’s grave after his passing. It was the first church to be built in Edinburgh after the Reformation in 1560. 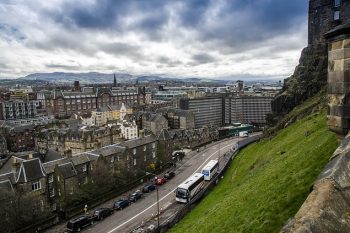